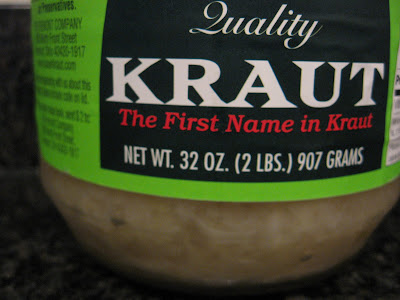 The very first name. Do other krauts aspire to trump Frank's masterful cabbage manipulation? Tamalehawk pondered what it must be like to be the very first in something. Is there anything available anymore? He wanted something that wouldn't require much physical taking so much as default accepting. He'd keep his eyes open.

Today's triumph: Portable Poor Bird's Reuben. Slap some turkey and provolone on some bread and heap on some of the first name in kraut. Make some dressing by mixing ketchup and mayo together. Toast it and eat it while bravely facing the uncertainty that is the second half of the afternoon. Also: Tamalehawk ate at Chili's, which, it should be stated, is the first name in oversized suburban chain restaurants. Tamalehawk always spared them the scorn cast upon Friday's and Bennigan's and full-time phony Applebee's. When you consider the rating scale these behemoths are measured on: Thickness of Menu, Appetizer Quantity, Food Name Wackiness, and Wall Fixtures - Chili's sits high on the heap. Every item shown in the menu is in motion; wine is being poured from great heights, butter balls are colliding onto steaks like meteors to Earth, shrimp are cascading onto a fajita, causing peppers to erupt everywhere. Tamalehawk approves.