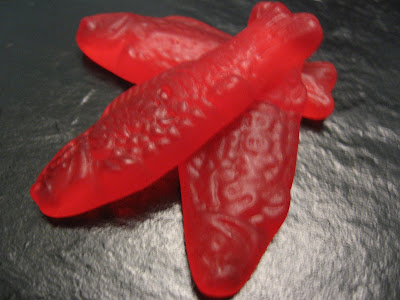 There is an old fable of the Swedish fishmonger who was sad that all the children in the village ran away from him because he smelled like fish all the time. He was going to drown himself in the Klardlven river when he accidentally knocked a satchel of sugar on top of some perch. Later he was indicted for armed robbery and suspected of three local arsons and eventually died in a bar fight but at that point candy factories were already making Swedish fish.

Tamalehawk thought about how candy pioneers suffered to bring joy to a savory world. He silently thanked them as he ate a pre-show Snickers courtesy of Arnie. The best candy bar, incidentally, is the Skor bar, a rigid continental shelf of toffee coated in a lush layer of chocolate sediment. Adding to the perfection is that fact that Skor means "shoe" in Swedish, a moniker no doubt accompanied by its own lurid and tragic Swedish folklore.