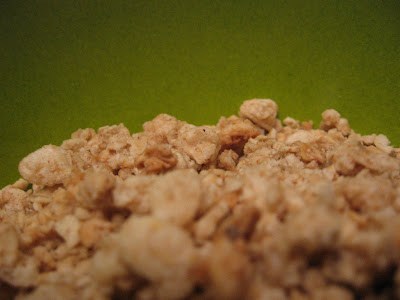 Tamalehawk absconded with perhaps the perfect granola from New Leaf Grocery. What attributes make granola worthy of such a title? Crunchy, but not violently so. Flavorful, but not in a synthetic way. Uniform and intriguing clusters. You can go the Ginger Snap or the Vanilla Almond route or mix them both, either way you have the perfect supplemental meal when it's ten o'clock at night or when you're procrastinating installing the new bathroom fan.

Tested new Cooper's strategy: For two people, order one appetizer, one sandwich with fries, and one dessert. Add a cup of soup impulsively and do not regret your decision. Dining out is about rash, half-cocked audibles to your order. Tamalehawk recommends the Reuben, made of corned beef that has been smoked for a century, the cream of broccoli soup that made him want an immersion blender with an unsettling urgency, and the homemade streusel and coffee ice cream, also homemade. It should be noted that if you've never been to Cooper's, you should be ordering the pulled pork sandwich without hesitation. Now that this fact is publicly recorded, Tamalehawk can let the matter rest until another opportunity to laud its merits presents itself.