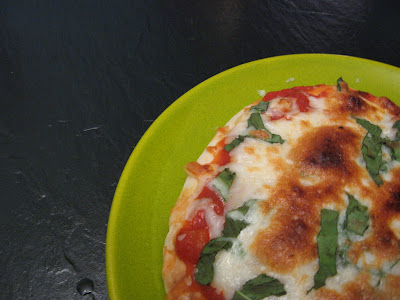 Sometimes, you get lucky with the things you have on hand. Sometimes, you happen to have all the vital ingredients for a makeshift Marghepita pizza. If Marghepita is too formal to scribe in your food journal, 'Rita Pita is also acceptable nomenclature, albeit a slang derivative. Just pile basil, marinara, and mozzarella cheese on a pita and broil. Remember to first broil your pita on one side, then take it out and add the toppings and broil the top so that it's warm all the way through. Hang out until the cheese is brown in spots, because they are pockets of awesome in a sea of delicious. Take a bite and be instantly transported to Italy via your desperate college days.

Recommendation: Erba on Lincoln. Seeing Urban Italian on the awning can easily inspire both hunger and fear in a potential patron. Luckily, Tamalehawk is of the mindset that urbanizing anything makes it worth a look. Eaten: asparagus soup, romaine and arugula salad with "24 hour" tomatoes and Parmesan crisps, goat cheese gnocchi with pesto, potatoes, and green beans, and spaghettini with shrimp, calamari, clams, and scallops. All standouts. Follow the whole thing up with the apple crostata, which you may have seen gracing the cover of a recent Chicago magazine. As a general rule, eat anything that's been on the cover of a magazine. Unless it's like Barf Weekly or something. Tamalehawk adds the crostata to the list of cover foods he's eaten, alongside Hopleaf's famed ham sandwich with tarragon-apple slaw . It's important to have standards.