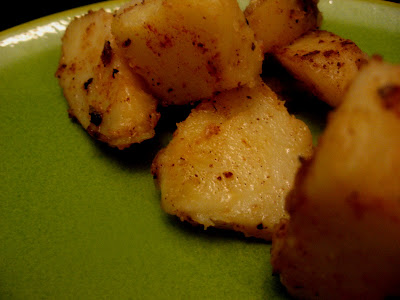 There's not a lot to say about the potato that hasn't been thoroughly purported already. Diners worldwide seek refuge in the starch quarry, staking baked potatoes and hammering hash browns like eating is illegal.

Tamalehawk always eats 40% more fries than planned, even diving beneath the discarded napkin to mindlessly masticate...oh, you get it. Potatoes are like the friend you first meet when you get to a new junior high school. You're super excited to know anybody, but you haven't had time to scope out any other potentials. Then he starts walking with you to Civics class like he's your girlfriend and finally you want to just be like "For the love of god, Josh, back off for a minute! I'll see you at lunch!" and stalk away, leaving Josh there with a tenuous grip on that stupid Trapper-Keeper he hasn't realized is cripplingly nerdy. It isn't until senior year, when Josh has to suddenly move to Akron with his step-dad for mysterious reasons, that you realize he's been through some weird stuff and it wouldn't have killed you to be a little more patient with him. Ahem. Potatoes.