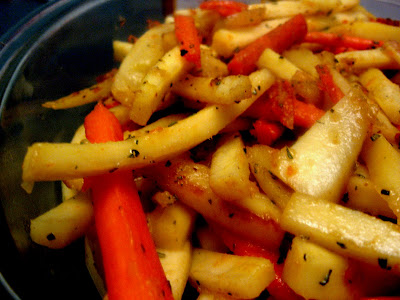 Parsnips are raising their public profile, people. No longer relegated to the bottom tier of the root vegetable family, frequent TV and magazine appearances are turning 08 into a banner year for Pastinaca sativa, if you know what Tamalehawk is saying. Is there something better Tamalehawk could be doing than indulging his penchant for parsing parsnip popularity? It's a fair question.

This recipe came from Bon Appetit - carrots and parsnips with honey and rosemary. Cut everything and start cooking it in a pan. Add everything else. Finish when everything feels tender, like your self-esteem right after you've been crying. It should be noted that Tamalehawk doesn't really see what carrots are bringing to the table in most applications. Color, sure. Some faint sweetness. OK. He's just not really impressed. A nest of limp shavings on his salad? No thanks. Piled high where meat should be in his Szechuan? He'll pass. But here, they do OK. Also in the carrot salad at Aroy Thai on Damen, which is strangely delicious because of some magic lime marinade that you just can't get with the lunch special for some reason, which unfortunately goes in the strike column of an otherwise reputable restaurant.