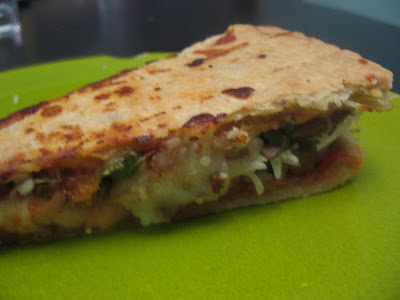 In his youth, Tamalehawk could eat an entire frozen pizza in one sitting, during a commercial break, without even gesturing toward a beverage. He's mellowed out somewhat over time, and eating has become less corporal punishment and more something to be enjoyed and at least lightly regulated. As such, he finds himself with leftover slices.

What could be more delicious than rubbery, congealed frozen pizza slices the next day? The translucent peppers, the grainy sausage, a black thing you convince yourself is a mushroom. Faced with this sad reality, Tamalehawk employed one of his coveted culinary parlor tricks: force everything into quesadilla form and pan fry. It occurs to him that this is a practical re-imagining on the 7-Eleven P'Eatzza Sandwich, which is hilscarious, except his version inverts the pizza so the crust is on the outside. It sort of seemed like you wouldn't want sauce and cheese streaming down your wrists as you hurriedly eat it in near-complete secrecy. Nestled between the pieces is more cheese to act as a binding agent. Fry until crispy and flip over, repeatzza.