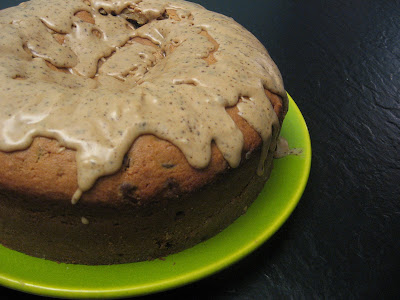 Part 2 of the two-part series Glaze Makes Life Worth a Damn, this specimen embodies the theme of the series more than Tamalehawk could have ever hoped for when he approved funding of the project. A chocolate-chip and brown sugar poundcake truly touches the sun when coated with a maple and espresso glaze. Forged by the brave wingtips of a determined Ladyhawk, it was as if somehow the concept of glaze itself wrote this recipe, an aria to its own ability to make you lick a spatula long after it's been sitting in the sink.

For Christmas, Tamalehawk welcomed a new addition to his arsenal - a nonstick pan that goes from stove to oven to broiler without flinching. Let's just say frittatas fear him. He knows it will be a sad moment when he retires his old nonstick pan to the trash. A loyal friend since sophomore year of bird college, he will quietly say a few words during the act, loud enough to be heard if you're very close by, but not so loud that you'd come from another room to investigate. He also got a new paring knife to replace the one he broke in half prying apart frozen hotdogs.