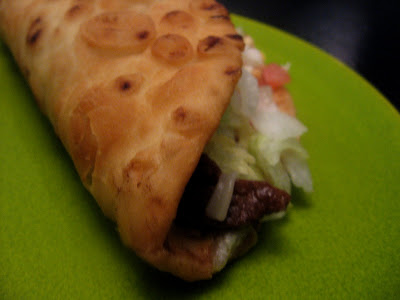 Tamalehawk never set out to take glamour shots of Taco Bell chalupas, but it just goes to show that you never know where the tradewinds will carry a journeying bird. Nothing about the clandestine clamoring for Dr. Moreau's Mexican monstrosities is something to be proud of; the subsequent sorrow of such sad shambles south of the Border always outweighs whatever fleeting glee the varied Value Menu brings. Still, Tamalehawk is just a predatory bird with impulses, and sometimes, in the face of the awaiting regret, Taco Bell just sounds like such a perfect idea.

So, OK, what do you get? The beef and potato burrito on the Value Menu is a solid option, pleasantly filling, as potatoes wrapped in flour are wont to be. The above chalupa marks the first time Tamalehawk ever splurged and ordered steak instead of the standard seasoned beef simulacrumbles. It rocketed to the top of his favorite bagged-meat shame-treats, in a league with KFC, Burger King's chicken sandwich, and the one time he and some fearless friends faced the chest-grabbing Wendy's triple stack. Even journaling these exploits gives him heartburn.