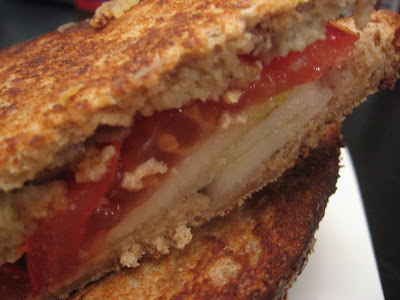 Tamalehawk wishes to inform you that he has no idea what this is. It is a sandwich made of mystery. Obvious tomato and likely cheese, but for the life of him, there's no deciphering the other elements. It is not long into this new year, this year that started off with so much promise, and he has found himself flying in low, lazy circles, looking at everything and nothing at once. His sandwiches have blurred together, mashed into unmemorable amalgams where once hope was delicately stacked and seared. Chickpeas? Chicken? Cauliflower? He glides through alleys and avenues for clues but the city is not kind to a lost hawk.

He considers himself lucky he bothered to pose the ghostly halves. What's next? Will he, so straying from standards, finally post the endless photos of fried eggs, whose refusal to look appetizing has rendered Tamalehawk's trash replete with deletes?