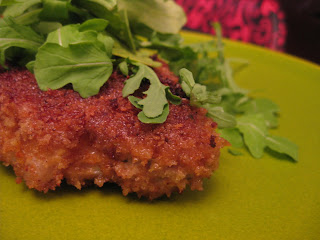 Tamalehawk was instilled with win even before beginning this dinner - he scored three meaty pork chops for a seriously scant $2.37 at Edgewater Produce, a regular stop on his grocery circuit. He likes to dive and hover low over the toppling crops, grabbing scallions in his talons and leeks in his beak. He never skips the deli counter, where everything is often fifty percent cheaper than Jewel. Don't sleep on the homemade salsa either.

He spotted these chops and set his expectations low - the center cut boneless are notoriously bland and overly lean. He breaded them steadily in a sea of seasoned panko breadcrumbs, making sure to lightly pre-oil the breadcrumbs for maximum golden crust. A few minutes and obligatory arugula leaves later, Tamalehawk was delighted by the sight of these finds, worthy of another spasm of his patented pleonasm.