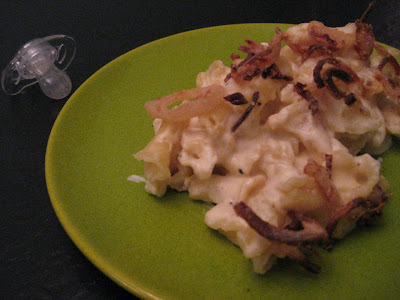 Another vintage image from the halted vault. In addition to being the seminal comfort food, mac and cheese is perfect for experimentation. Impel the bechamel to view new heights with a precise spicing, boldly fold in whatever you're holding, and strew a slew of something crunchy on top - crispy shallots, for example.

Fast forward to tonight, where Tamalehawk balked at a sauce that was turning awful before his eyes. He called a pasta audible, making an emergency bechamel pervaded with bacon essence, garlic, and cheddar. Normally Tamalehawk would toss the lost sauce directly into the trash in a flash a rage, but he instead kept his head and saved it for another adventure.