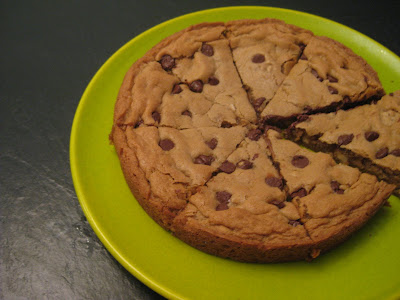 Some weeknights, Tamalehawk neglects the expected spectacle of a legitimate meal, choosing instead to each eat mangled red pepper strips dipped in ketchup from Babyhawk's tray as he stands over the garbage can. Glamorous, he knows, and worthy of a whole photo spread. Even though dinner was missed opportunity, he thought of all the room he was making for dessert.

He scratched a batch of blondies to fill the dinner-shaped hole in his stomach. Blondies involve a staggering shovel of brown sugar that gives them a golden hue and pronounced praline flavor. Having shattered his glass baking dish ages ago, he reached for the cake round. Circular and sliced, it's kind of like a quiche, so it counts as a square meal.