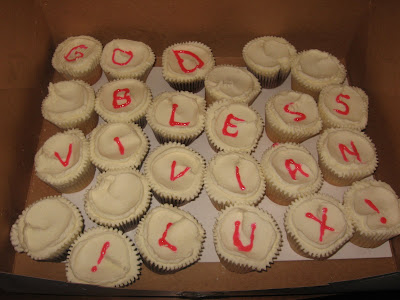 Another journey to spurned half-drafts that lay slack in the tractate. Here he finds himself transported back to mere months after Babyhawk first chirped. Tamalehawk strafed a busy sidewalk wielding this wobbly box of 25 award-winning cupcakes, on his way to a second store in search of icing you could write with, because Southport Grocery only had red or purple and neither of those are pink. Of course, pink comes out about as red as any red ever would, so it was all in vain. But, these are the things you have to do when your Babyhawk deserves the best of everything, including an extra exclamation point.

While her tastes have evolved, she'll still devour a cupcake or cookie (or "deek") with a disturbing precision that makes him proud. Though it's tough to stop from feeding her sweets from his extended wing, her strange affection for string beans seems compensatory.