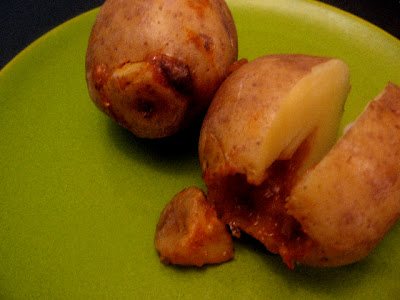 The reasons Tamalehawk rushed this protatotype to market are two-fold: First, the raw materials had been lingering on the fridge without consideration for some time, and second, a few recent remarks by some ptarmigans in the media have implied that he may be slipping, content to buy precious pre-made products from Trader Joe's or phone-in a pasta dish.

He'll admit it is getting tougher to take strides in the kitchen. This time, he wanted to make something that was a cross between a grenade and a potato, or a grenato, by coring a Yukon Gold potato, stuffing it with something good, and putting the pin back in. His experiments yielded promising results - a delicious molten core baked from the inside, exploding like shrapnel when dissected. As he moves to the next phase of development, he would definitely par-boil the potato first to facilitate easier pin removal. Pictured, he went with sofrito as the incendiary material, but in future iterations, he would gladly go with nacho cheese, gravy, or even some kind of soup.