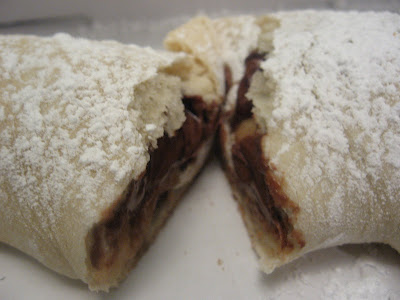 Tamalehawk is happy to recommend Apart Pizza on Montrose, a place he had long ago spotted in his travels. It is thin and cut into slices like pizza was designed to be. They call it "Italian style" but it's close enough to Tamalehawk's native New York style to send him back to the old days. Pictured is the dessert, called filoncino, that he ordered as a climactic denouement to his margherita pizza. Who orders dessert from the pizza place? Firmly in the dessert zone, he had to come up with something to calm the roiling riot in his stomach the following night.

Emergency dessert: Preheat oven to 350. Take single remaining pie crust from freezer where it has been since Thanksgiving, peel the three layers of foil off, and leave on the counter to defrost for fifteen minutes. Sit down and watch some TV. Forget you were in the middle of making something, then remember. Put the crust in the fridge because you've let it get too warm. Take out Nutella and raspberry preserves. Watch TV standing from the doorway. Take crust out of foil tray and cut into squares, place them on a cookie sheet. Place a spoonful of Nutella and preserves on pie crust squares, making sure to get Nutella on the counter and the back of your hand somehow. Fold the square over to make a little triangle wonton and press the edges tight. Bake it until it's golden and sprinkle with powdered sugar. Eat it too quickly and grip the sink tightly and you attempt to cleave the molten filling off the roof of your mouth with one hand while grabbing for another triangle with the other.