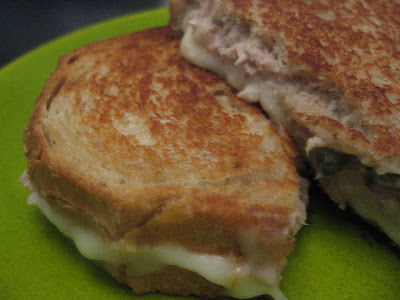 The first in a two-part series entitled Diner Sandwich Revival. The tuna melt is a crapshoot in any region or restaurant. Let's face it, the two words clang cacophonously together, conjuring an image that could easily be incongruously unappetizing. Nonetheless, it perseveres as a recognized part of the American diner canon, so a certain modicum of respect is due. Tamalehawk would rarely pull the trigger on this ubiquitous option, for fear of what might emerge from the kitchen. Will it be open-faced? On an English muffin? Will pineapple slices somehow be indicted? That unsavory uncertainty is often quite enticing to Tamalehawk, but in this case, he'll usually peruse for a more foolproof option.

The star in any classic melt is the rye bread. Mild but flavorful with an even toasting consistency, the rye bread is responsible for bring the melt genre to prominence nationwide. On the bread tip, Tamalehawk wishes to endorse Panes, a family-run cafe on Sheffield and Wellington. He called a lunchtime audible and picked up a roast beef sandwich with fresh farmer's cheese and ranchero sauce on fresh focaccia, cream of broccoli soup, and a tortilla salad. The menu is entirely excellent sounding and shockingly affordable. He will be back for the white chocolate rice pudding, Oaxacan pork sandwich, and fresh baked sourdough loaves. Dining local never felt so right.