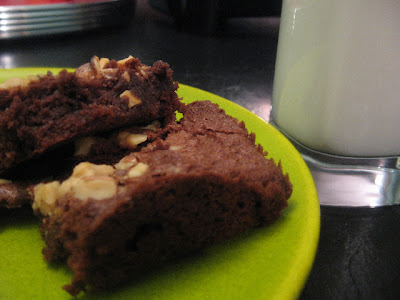 It's hard to describe the level of obsession Tamalehawk has forged for these brownies. Simply put, this represents the apex of his lifelong brownie journey, the culmination of three decades of hope and heartache. These brownies sit besides the first and most powerful brownie memory Tamalehawk has, still strikingly vivid all these years later: a small hawk, barely able to fly let alone hunt, waiting patiently in a long line of small hawks in the schoolyard to buy a giant slab of frosted brownie with colored sprinkles for fifty cents. Ten minutes of anticipation and finally he was able to step up to the giant pink bakery box, fluttering in the midday breeze, and claim his long-awaited walnut-studded prize. The rest of recess never mattered; so transfixed, it was rare he ever made it past the curb.

The Cook's Illustrated recipe for Classic Brownies feels fussy and starts off tedious. What are you asking us to do with the foil? Fold it in half and then into a strip? Whatever. Cake flour instead of all-purpose, huh? OK, he'll give you that one. Definitely go with the microwave method to melt the chocolate; the double-boiler is for suckers and zabaglione. Tamalehawk was skeptical, until he got a look at the crusty light brown top in the oven. Miles away from the black soupy fudge of box brownies, this batch reached into Tamalehawk's soul and blazed for him a perfectly primmed path to his youth. He can't even bear to give any of these away.