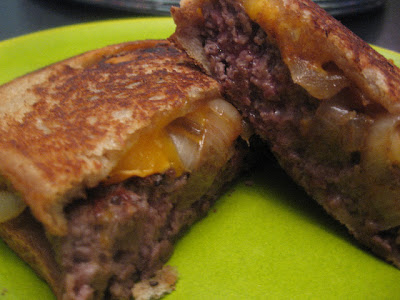 Part two of the series Diner Sandwich Revival. The patty melt, arguably the stoic grandfather of the melt genre. On millions of menus, it's easy to overlook this gentle giant of the national dinerscape. It wasn't until Ladyhawk went on a three-day multi-city patty melt jag that Tamalehawk was forced to pay homage to what, in many cases, is better than its burger brethren.

Let Tamalehawk explain: You've got the signature grilled rye bread again, which is better than the standard bun you will likely get. Then the cheese - the cheese really comes alive upon the patty stage, relaxing all active cultures into a web of stunning coverage, forming a new, symbiotic relationship with the caramelized onions, themselves a pivotal part of the flavor balance. Tamalehawk also learned this from the television set: don't overwork the ground beef, it makes it too tough. Also, season the outside like you would a steak, instead of mixing it in - salt pulls moisture out and makes it too dry. Now he goes straight from package to pan, the satisfying sear sending seriously sonorous signals to his stomach. A word of caution: as it's an intense experience, don't get too caught up in your pursuit of the patty melt; you can suddenly burn out and find yourself grabbing for salad in an attempt to ease the gathering meatlock within.