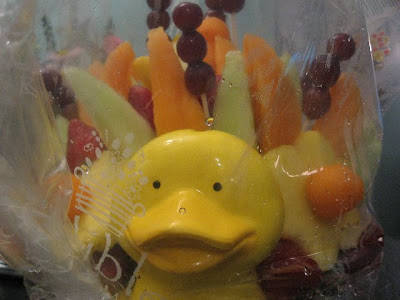 The S.S. Suffocating Duck fruit barge sailed into port the other day, much to Tamalehawk's chagrin. It was an unexpected arrival, and all the locals wandered out to stare as it lurched to a grinding halt. He couldn't identify whether it was a diving or dabbling duck, but judging by the tell-tale slit on the top of its head, it was definitely an unusual species of banking duck. At first, he was concerned that the jagged spires of assorted fruit spiking out of the duck's back were painful, but one look at the wry, casual grin confirmed that this duck was proud of what he was doing.

After getting lanced several times, Tamalehawk finally defruited the duck bank and pried free the head of half-rotten lettuce into which everything was skewered. That was a disheartening and lengthy process. All in all, a thoughtful, if a bit unwieldy and initially frightening, mostly delicious gesture. A BaeRating of B-. If you are interested in sending congratulations to someone about their recent waterfowl investment, or condolences about the loss of ceramic animal bank options on the market, you can shuffle down to Edible Arrangements on Southport and Waveland. It's an actual store. He must warn you though, the urge to heave the duck bank off the balcony is dangerously high.