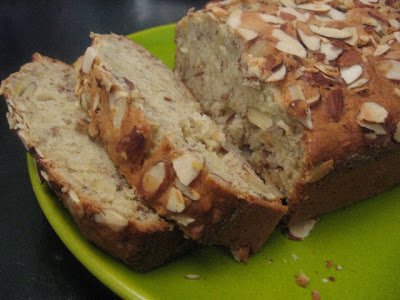 This Bananamaretto bread came dangerously close to being named Bananamabreado, but the triple-word score didn't seem worth the near-total obscuring of the meaning or pronunciation. Tamalehawk invites you to take your pick. This recipe is Part 2 of the ongoing Banana Bread Variations, in which a standard recipe is remixed to unlock everything that could possibly be paired with the namesake fruit. This time, a healthy nip of amaretto and heaping handful of toasted almonds permeate and puncture the pan perilously, and the resulting crunch and flavor should silence any bananaysayers. That word didn't work as well as he hoped. If you have any suggestions, please let him know.

Tamalehawk also took a chance on a new and nearby pizza place unfortunately called Pizzaco Italian Eatery. He called to confirm the suspicion borne from a blurry glance during a recent flight down Ashland: New York Style Pizza. Could it be? Should it be? The man on the phone confirmed and 45 minutes later Tamalehawk was eating what in several crucial respects was "in the style of New York" pizza. Pie cut, close enough thickness, good cheese-sauce ratio - all enough to warrant a second order. There was no trademark rivulet of neon orange olive oil gently cascading down the center of the folded slice, but he's keeping the menu near the top of the folder all the same. Update: Never really been back, Apart pizza is way way better.