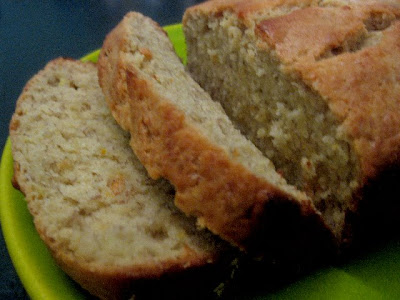 Hot on the heels of the best brownies ever, Tamalehawk tried to put some questionable bananas to use by making banana bread. Banana bread is the last respite for listless bananas, no one willing to look past their mashed and mottled skin to appreciate them. Feeling vaguely guilty, Tamalehawk swiped a recipe from the internet and set the dial to remix.

Orange Ginger Banana Bread: Print out a banana bread recipe that you're comfortable with and doesn't usurp an obnoxious amount of your meager staples. Try to print it in black and white but get the color version despite your efforts. Start making it, but replace the cinnamon with ginger. Like 1 1/2 teaspoons if you're using the dried stuff, and if you have fresh ginger laying around, then fashion yourself a medal because you've already won life. Add the zest of an orange. Consider locking the door because you've just defied Mother Nature and you are about to feel her wrath on the back of your neck. Bake for about 50 minutes or something. Circle around the bread, touching the pan and burning your fingers, finally letting it cool for a least a few minutes already. Pen the second part of Unwavering Citrust, wipe off the flour that is on your temple and walk around triumphantly.