The Bounty of Persistence 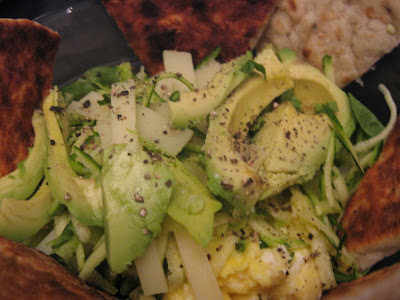 Halfway through construction, Tamalehawk was seized by the sensation that something red needed to be hastily sketched into the blueprints. This delayed the build-out for several portentous moments, during which it was feared that the whole project would lose momentum and devolve into a standard cereal sojourn (SCS). He eventually resigned to the largely green scheme and his rare bout of composure was roundly rewarded.

This is: spinach with olive oil and balsamic, topped with scrambled eggs, shredded zucchini, Swiss cheese, and avocado, with toasted onion flatbread. Tamalehawk inhaled this as fast as his mandibles could maneuver. It was just insanely fresh and awesome tasting and he instantly wanted to abuse that healthy feeling he had by impulsively making an entire second one. He battled this behavior and just barely emerged the victor. That is the life that Tamalehawk is burdened with.