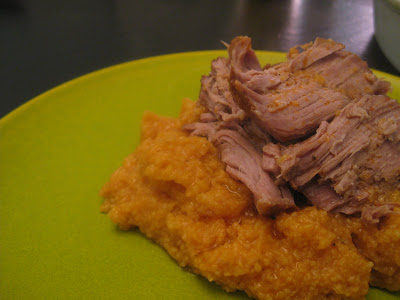 The account of Gene's mounting bounty recounted, here in the form of fork-tender boneless pork shoulder, traded at the deflated rate of a mere $2.99 a pound. This is prime meat for carnitas, though this time Tamalehawk seared it and braised it in a bacon-tomato broth with some garlic and sherry vinegar for three hours.

In the waning minutes he realized he could make a polenta foundation for the pork monolith. It turns out you just need a cup of cornmeal and a quart of liquid to make it happen, and some butter, cheese, and salt to make it worth eating. Tamalehawk stole some of the braising liquid. Make sure to grab the pot lid bare-winged, recoil in silent pain, and stalk around your kitchen in maddeningly concentric circles while football noises from the TV mask your palpable hunger-rage.