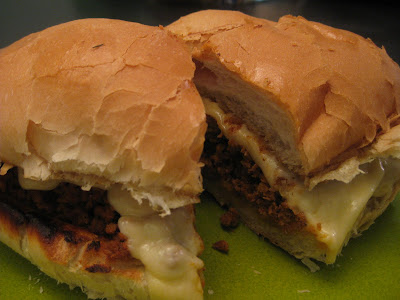 So on Wednesday, Tamalehawk made these tortas for dinner and they were what he'd call a success. He got the chorizo, torta bread, and chihuahua cheese from Edgewater and forgot about four other things he would have put on them but all in all, a very satisfying dinner. He even toasted the bread in the pan of lingering chorizo grease, creating a crunchy orange crust that made him pause for a moment of silent reflection on the power of fat.

Then on Thursday, Tamalehawk and associates headed to XOCO downtown for a mid-week lunch adventure. One thing Chicago superchef Rick Bayless does not do is mess around, and what he has created here is nothing short of a sandwich Valhalla. After a feeding frenzy of four tortas, guac, almond milk with freshly ground chocolate, and churros, Tamalehawk staggered out having forgotten all about Wednesday, and angry that any person would ever consider making a sandwich without Rick's strict supervision. Also, everyone, the churros. If the next thing you chew isn't one of these churros, then you should really retire your jaw because it has failed you.