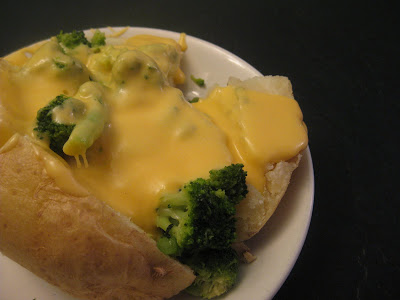 One genre that Tamalehawk carried back with him from England was the potato-as-entree "jacket potato," wherein a giant potato is bedecked with a melange of toppings and promptly torn apart in a savage fashion. He didn't have the more traditional British beans or tuna on hand, so he opted for the distinctly American practice of taking a vegetable and suffocating it in cheese sauce.

In other news, he was wondering if it eating increasingly smaller dinners in order to justify eating a larger dessert is a self-destructive habit or a stroke of genius. He's not sure when that switch started happening, whether incremental, or triggered by Halloween, or in preparation for the holidays, but it has become a hardship that Tamalehawk will bravely endure.