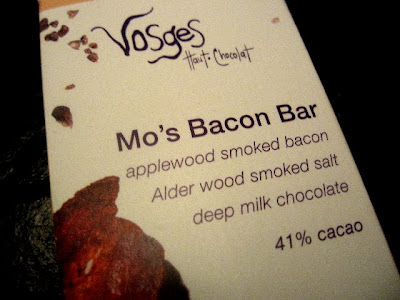 Tamalehawk has relented, releasing a response to the swarming sheaf of seagull reporters encircling his nest. It is true: Bacon and chocolate, two of the world's most prized flavors, have formed a strange and slightly terrifying union, choosing to debut in an ersatz candy bar form. Of course, Tamalehawk is going to eat this abomination with a feeling that may be described as a violently shaken cocktail of trembling excitement, grotesque curiosity, and defeated obligation.

Strangely enough, Tamalehawk could see the connection these two dynamos might together forge. True, in daily life they ride the opposite ends of the flavor spectrum, but when mapped in a Venn Diagram, he could imagine a small overlap somewhere in the "smoky" realm. In the way that coffee roasted with tobacco can be a welcome punch in the mouth, perhaps these two could coexist in a type of begrudging harmony. Verdict: Sort of. Oily, rich, and intense, it was probably the crunchy bits of bacon that most assaulted his palatte. As much as Tamalehawk was praying for success, these two entities are best enjoyed separately. Separately as in successive bites of each on your breakfast plate, from chocolate croissant to bacon strip and back with an instinctive and unchecked zeal.