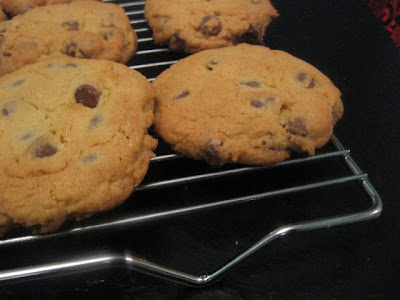 Just like reality TV, the chronology of the tractate has become slightly deceptive. These chocolate chip cookies had been the impetus for the previously featured white chocolate chip ones, not the encore. Anyway, Tamalehawk's baking bender has subsided for now, though he has already drafted deviant designs for the next bout of full-blown bananarchy.

Unpictured white chicken chili: Saute some chopped white onion and garlic in some bacon fat in a heavy-bottom soup pot. Add coriander, chili powder, cumin, salt, and pepper. Add your chopped up chicken, and two cans of rinsed and drained white beans. Speculate for the thousandth time on the mysterious difference between cannelini and great northern bean varieties. Conclude that it is a global conspiracy orchestrated by a malicious bean star chamber that seeks to reap its own brand of twisted legume justice at any cost. Add some chicken stock. Let it thicken, adding some flour if you want. When the chicken is cooked, turn off the burner and let it sit for a little while before eating. It tastes better after some self-reflection. Consume while guiltlessly watching America's Next Prom Queen on Oxygen because that channel has some seriously strange programming.