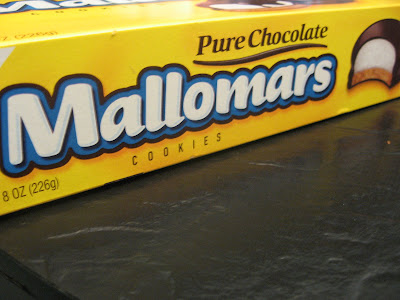 There is no correct way to eat a Mallomar; what is irrefutable is the cookie's place in the snack hall of fame. Sure, it may be featured in a smaller wing, sort of by the bathrooms or on the fourth floor by the privately-funded Teddy Grahams exhibit, but its display is a respectable one, poised beneath glare-proof glass and beside a stately foamcore timeline illustrating its illustrious evolution to the forefront of east coast pantries. If Tamalehawk was curator, or at least an influential docent, he'd probably oversee the installation of an entire east coast snack feature, annexing part of the gaudy Reese's wall in the lobby and reprogramming some of flat-panels to show a sepia-toned tour of the original Drake's factory on an endless loop.

Dreams aside, a Mallomar is a dense dome of industrial marshmallow atop a disc of graham-like cookie, submerged into a chocolate approximation, which then forms a formidable shield, a byproduct of whose purpose may actually be flavor. Tamalehawk could make an entire sleeve disappear in one sitting if he suspended his better judgement. Also, their buoyancy allows them to float in a glass of milk in a way that makes Tamalehawk marvel like he was an innocent eyas again.