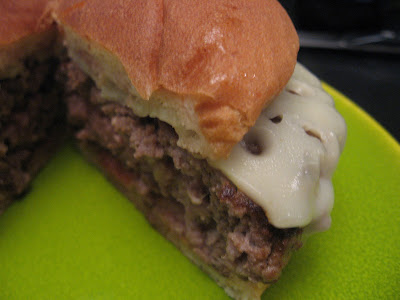 Tamalehawk has expounded on the best city burgers he's tried, documenting discoveries within the boundaries of his fly zone, which ranges from medium-far north to sorta west and mostly east and about as south as maybe Diversey. The true barometer of any place serving them, the care put into the forming and grilling of your burger is a direct correlation to how much they value you as a customer. It's actually a complex equation evolving a cosine, a set of biconditional elements, and a heavily nuanced duodecagon, but the result is startlingly simple: the burger barometer never fails. This one is the first product of the griddle renaissance which lasted an entire holiday weekend, seared in some bacon fat.

Tamalehawk was honored to inhale a profoundly awesome ratatouille, crafted by some gracious crested owls. Flanked by a pair of grilled brats, he thought he might choose to never leave the table and instead see if delicious food would just continue to appear before him. Brats and chocolate chips cookies - two things Jewel hits out of the park. Their festering produce section could be visibly devolving down to a microbial level beneath the relentless mist sprayers, but brats and cookies are where they really soar. Also, a generally pervasive aura of savings.