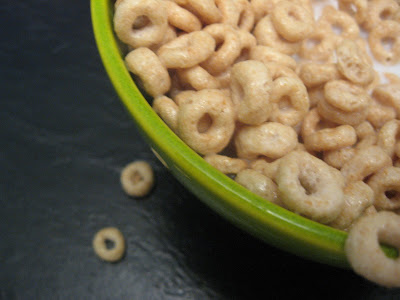 What, in the end, will these Cheerios find with their new freedom? Will life outside the bowl live up to the expectations they have created? Sadly, evidence to the contrary is all around us: under carseats, behind couch cushions, stuck to sock bottoms. No, the taste of freedom is not honey-touched like in the dreams of these rogue oats, but rather a series of failures, a stream of sad admissions that their round shape could not roll them to a better place. Their fate is in the awaiting maw of a fussy child, or decades later, a man who is just not interested in preparing a proper meal for himself.

But seriously, Tamalehawk knows you know not to front on Cheerios. They have always been there for you and are still there now, steadily expanding their varieties to suit your sophisticated adult palatte. Yes, you are correct that Honey Nut Cheerios are the best, but best is a relative term. Multigrain is an admirable yoga-instructor cousin, Frosted is a strange but welcome half-brother who is a mesmerizing juggler, and Apple Cinnamon is probably also a terrific uncle but really, with Honey Nut, why bother. Not to mention a new "burst" line, including Berry Burst and Yogurt Burst, which would presumably be a niece and nephew in the Cheerios family. Tamalehawk hasn't tried them but, if voting, he comes down distinctly on the side of adding "bursts" to any food product. And of course, the grandaddy, wonderfully nostalgic Plain. In Tamalehawk's books, these Mills are anything but General.