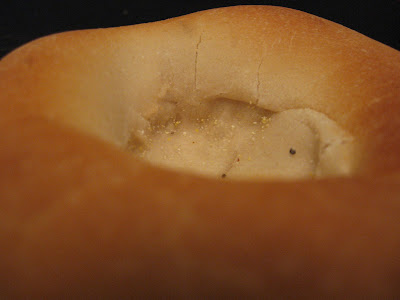 Tamalehawk has come to terms with the fact that a thriving bagel culture has not entrenched itself in the Midwest, but that doesn't mean he doesn't still feel the longing on a Saturday morning. Breakfast just can't be the same. Harder to acquire than the bagel is the rarely photographed bialy, captured here only in the grim repose of death. A sad fate for such a noble starch, who must brave the heat of the hearth without the bulwark of boiling first.

If there is a reputable bialy repository in the city, notify Tamalehawk post-haste. He has located a place on North Avenue that does a good job but few things are worth traversing the gnarled retail morass that surrounds it. Also, just like a roll? To assemble a bacon and egg on a roll sandwich? Which exists in its own wing of the Breakfast Hall of Fame? That you have to pay an extra $5 to visit but is completely worth it?