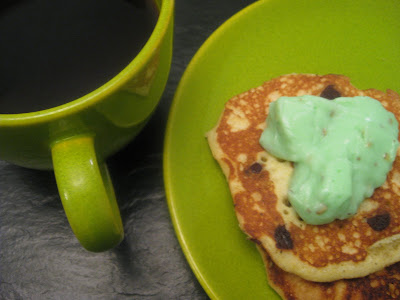 Tamalehawk asked the eternal question: Why eat pancakes for breakfast when you could eat chocolate-chip corncakes with pistachio pudding? He wakes up on the weekends visibly troubled by the endless potential buried in that first meal of the day. He doesn't want to let it slip through his wings with by succumbing to a regular bowl of cereal or toast. When the coffee starts brewing, it's like a race against himself in a fight against his stomach.

Which is difficult when you waste three eggs trying not to break the yolk for your daughter who would probably be just as happy eating petrified Cheerios from under the buffet. Thankfully, he only needed one egg, some straggling chips, and some leftover pistachio pudding from an emergency dessert the night before. Verdict: totally devoured, proving once again the power of the world's greatest nut.