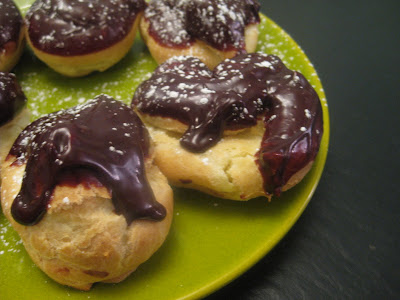 Tamalehawk's endless quest for dessert forced his wing in the kitchen again, and after fifteen manic minutes of preparation and fifteen more in the oven, he had made what he had to admit were pretty terrific profiteroles. His first pâte à choux proved not too tricky, and he plans to ensnare a pair of éclairs soon enough.

Since it was late and way past any watchable Bravo show, he skipped the custard filling this time and instead opted for a frantic baptism in an emergency ganache made in the microwave with some chocolate, a pat of butter for sheen, and cream. He ate three in a blink and polished off the rest of the ganache with a spoon because why waste that?