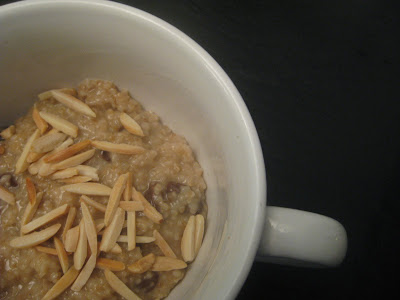 One benefit of Babyhawk's new habit of waking up yawning before the crack of dawn is the prospect of breakfast. Long his favorite meal, he normally forsakes it in exchange for a few more minutes asleep and dreaming about food. He has to say though, the smell of coffee and toasting almonds is an equitable alternative.

One quick look at his laughable larder, still reeling from its recent cleaning, revealed only oatmeal as an appealing premier meal. Though he's loathe to boil oatmeal in just water when it could be apple juice, coffee, or chocolate milk, swirling butter and brown sugar into a pot of anything will make Tamalehawk consider greeting the day with a modicum of positivity instead of the dubious half-scowl he typically fashions his beak into.