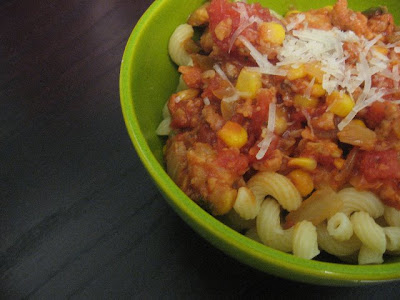 It had been a while since Tamalehawk completely destroyed his kitchen in a frenzy of clattering pans, slamming drawers, and feverish slicing. Based entirely on Ladyhawk's idea, he set to work on this strange creation. The goal was to scavenge the pantry and freezer, transforming neglected ingredients into a stronger, more delicious new entity. Can Tamalehawk turn a spurned assemblage into a beautiful bounty without getting burned?

Rag-tag Chili Mac: Purge some veggie burgers from the freezer, emerging as icy pucks, and were chopped into small chunks. Dice onions and garlic and get them going in a pan. Season it with what you have on hand - Tamalehawk chose a distinct dirmexion and added coriander, oregano, and cumin. Add some corn that has been hiding in your freezer door. You could probably add some languishing legumes at this point, maybe black beans if you have them? Add some tomato paste and stir. Slide in your chopped veggie burgers, and some canned crushed tomatoes. Throw some pasta into a pot a boiling water and turn the sauce down to a simmer. Add some pasta water to the sauce to loosen it up if you like that kind of thing, and spoon it over the pasta and serve. Bonus: pry open a bagel from the bag on your counter and make some garlic bread by topping with cheese, garlic powder and olive oil and throwing them under the broiler. BOOM. You've just made something healthyish that will get even better when you eat the leftovers the next day.