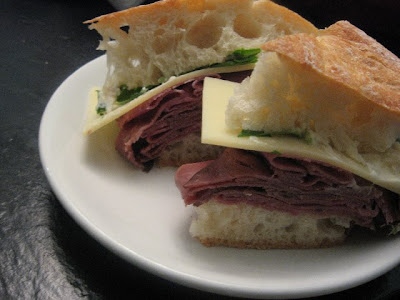 Tamalehawk apologizes. He never intended to leave you grappling the gravity of grapes for such a gaping gap of time. He has been eating nonstop, craving brownies at almost every turn, fighting impulses to shun normal food forever and embrace full-wingedly the blaring beckon of the constant dessert lifestyle. If it weren't for sandwiches like these, on fresh ciabatta bread from Bennison's in Evanston, he might tumble beakward into the chocolaty void.

Acting on the spurred curiosity of an owl, Tamalehawk pulled the trigger on Sarpino's, a strange sliver of a store situated in a nearby stripmall. It's kind of shocking how many things Tamalehawk will commit to based solely on morbid intrigue. He ordered a hilariously complicated taco pizza that was wildly overpriced, and some garlic-cheese breadsticks. The whole operation hinged on the suspicious dipping sauces. Final evaluation: Take Papa John's, add a Napoleon complex and a baffling global presence, and you've got Sarpino's. The pizza was very weird and the breadsticks were great, and he'd probably order it again whenever he feels a longing for the reckless majesty of his college days.