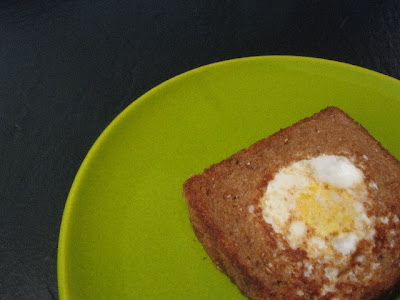 So, Wikipedia is calling this an Egg in the Basket, and since society has spoken on its formal title, who is Tamalehawk to object? You guys make these, right? Tamalehawk is a big fan of constricting the egg's reckless sprawl. Nothing is worse than setting your egg adrift like a jellyfish in poaching liquid, albumen tendrils ghostly coasting along. So, clearly, using the fried toast to fetter the egg is a satisfying solution. It's also a great use for terrible Trader Joe's bread that you got fooled into thinking was edible and have since been neglecting.

Speaking of being pleasantly fettered, Tamalehawk is officially on the search for a silver bullet take-out options to supplant the dine-in experience he so cherishes. He has long exhausted his folder of the usual suspects, and has grown resentful of their uninspired selections. Here are his judging criteria: Speed - it has got to be reasonable. No longer than an hour average. Packaging - it has got to be secure and appropriate. Friendliness - they've got to have a distinctly detectable tone of appreciation in their voices. Even a tinge will do. Selection - can you offer me something different? Tamalehawk has even stopped to inspect rain-soaked menus on the sidewalk for new contenders. That's how desperate he's become - it's a cry for help.