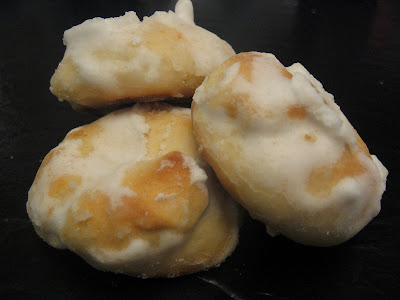 Part 1 of the two-part series entitled Glaze Makes Life Worth A Damn. Sicilian lemon cookies, displayed as a trio because Tamalehawk barely has the first one crushed in his beak before maniacally planning the demise of the other. After three he must physically restrain his own wing as it flails and flaps in search of a fourth and fifth. These indeed bring out the worst and best he has to offer. In a mirror, quickly think of all things that come glazed. Remember the face that you make. Now picture the same items, completely denuded of their glaze. Compare that face with the one you made previously. Without exception, your face transformed from delighted grin to deadly grimace.

For lack of a smooth transition to Chinese food, Tamalehawk will just lay it out there. He thinks he found a new home base. He has been struggling with the cuisine for some time; Orange Garden can't get their act together to offer delivery, most other places are obsessed with ladling a cabal of crinkle cut carrots and an odorous onslaught of onions in every dish. However, Silver Seafood on Broadway and Lawrence, delivered on the promise made by Check Please, which Tamalehawk had watched just a day earlier. It marked the quickest turn-around time from viewing to tasting, and proved a wise move. Great fried rice, bafflingly fresh chicken, crab rangoons that quite effortlessly go Beyond Rangoon, and only a small container of white rice which Tamalehawk feels no guilt about depositing directly into the trash unopened.