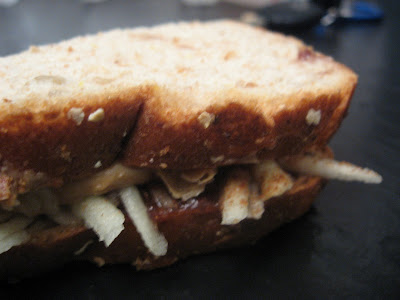 At three o'clock, eons after lunch and a lifetime before dinner, Tamalehawk needs to fill the growing void that is his hunger. Often it's a tortilla wrapped around something strange and broiled. Occasionally it's something wrenched directly from its jar, perhaps plucked from bottomless briny depths. On this day, a small bolt of inspiration led to this: a peanut butter, blackberry jam, shredded apple and cinnamon sandwich. It's not often that Tamalehawk gracefully handles the haunting chime of three o'clock, and this brief bit of guiltless guile made him flash a proud smile.

Critical update: Tamalehawk has secured what he was sure would remain forever in his imagination - an authentic copy of Seven Hundred Sandwiches. A remnant from the volatile sandwich culture of a nation poised on deep depression, this cherished artifact now claims a place of distinct honor in Tamalehawk's heart. One need only to glimpse the foreword to realize the true power of this tome; as it clearly notes the "constant and insistent demand for new ideas in sandwiches, new combinations in fillings, and new and attractive architectural plans for construction." Tamalehawk is filled with a renewed sense of purpose, determined to continue the groundbreaking work of his ancestors.